I read a book several years ago, an autobiographical account written by an American B-17 pilot. He was some writer and poet, and he would have gone on to write great stories had he not been killed in the Second World War. My heart ached when I read that. I didn’t want that for him. You see, he’d completed his USAAF tour, but he yearned to fly fighters and so instead of accepting the usual honour of being shipped home, he requested a transfer. Tragically, he was killed in action on November 26th, 1944. His name? Bert Stiles, from Colorado.

So, as I was saying, I read a book once and later, while writing, the going got a little tricky and I decided to re-plan. That’s when I heard it for the first time, as clear as day, a whisper in my ear. And it said, “Come with me, honey. Let’s take a walk.”

And so I took that walk, and I saw an ocean for sky, and learned how luck was a lady and so too was death. I learned something about flying those big birds, those mighty Flying Fortresses the guys called “ships” and how difficult and rough it was to fly in formation, to sail through flak and dodge fighters, or sit tight while they zipped by and rolled beneath your wings, all the while feeling the cannon fire hit the aluminium skin that surrounded you, sometimes tearing it open, sometimes ripping through your flesh and bone.

I heard yells and shouts over the onboard interphone system while pilots formed up, taking their place within those mighty formations in the sky, while group and wing leaders yelled and bitched at everyone for being in too close, or not close enough, and not in the right place at all. All this at ten-fifteen thousand feet above the tranquil English countryside which had never looked so green and would look even greener when Bert returned.

One particular mission to Leipzig, was rough, with Forts blown up, endless fighter attacks and Bert watching the mass destruction of the low squadron as they’re shot up, blown up and shot down. Only one guy came through it. As they flew home, he notes stoically the secret to survival is to maintain a tight formation, and the journey back to base on that occasion was easy because so many ships weren’t coming home at all. It’s incredibly poignant.

He mentioned some of the guys who went down on that mission. He stated the colour of Maurie’s eyes, and how he was ‘the walking symbol of sex’ and he hoped Maurie managed to bail out. After landing, he thanked Lady Luck for sticking with him.

That walk was an emotional rollercoaster because no one tells it like Bert Stiles. And the magic shines in his eloquent words because he spoke them so simply. There’s nothing fancy and yet it shimmers like sunlight splintering across the Atlantic.

That voice sits with me today and I’m thankful for I have a friend, as writers are allowed to have such friends. We see and we hear what no one else does and that’s a blessing, most of the time. But this voice changed the course of my story, and my main character went from being an English pilot with Bomber  Command to an American B-17 pilot. There is no reason for this other than the voice in my ear that day was present, filling what had been a constant silence for so long. It was compelling, vying to be heard, to get a message across and I was merely the vessel to do so.

And so it is that writing is unpredictable, regardless of meticulous planning, you have to listen to stillness and be willing to respond and shape your writing according to the music – as long as it feels right to do so. 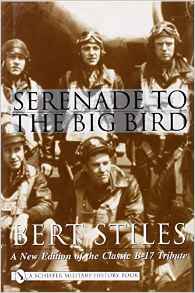 See my books page for more details and updates.