Plans had been set in place prior to the outbreak of WW2. Some plans had been in motion for more than two years prior, and others for around six months or so. The planning for evacuees began some months before. It was well known that if another world war erupted, this time around it would… END_OF_DOCUMENT_TOKEN_TO_BE_REPLACED

Today, as I finally begin to feel the approach of Christmas, I'm in the mood for...Glenn Miller. I always think of him around this time of year. Have you seen the movie, The Glenn Miller Story, starring James Stewart and June Allyson? It's fabulous and I never tire of watching it, but I warn you,… END_OF_DOCUMENT_TOKEN_TO_BE_REPLACED 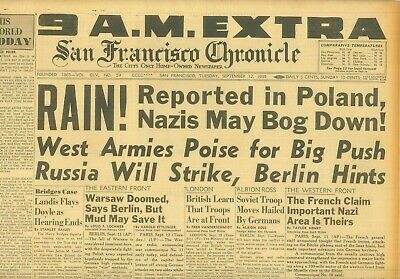 September 12th 1939 The Battle of Lwów begins. The Wehrmacht and the Red Army battle for control of the Polish city. The Battle of Lwow. Image courtesy of Wikimedia Commons In Abbeville, France, the Anglo-French Supreme War Council meet for the first time. In Canada, the Minister of National Revenue, James Lorimer, introduces a new tax… END_OF_DOCUMENT_TOKEN_TO_BE_REPLACED

September 3rd 1939 Prime Minister Neville Chamberlain declares Britain is at war with Germany. On the 1st September 1939, Germany invaded Poland, attacking all fronts. People throughout Britain heard the whispers of war grow and grow and by the morning of the 3rd September 1939, the tension hung in the air of many a household. Chamberlain… END_OF_DOCUMENT_TOKEN_TO_BE_REPLACED 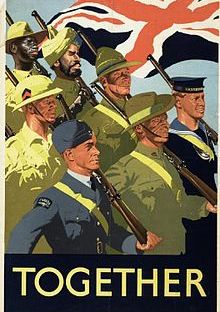 August 31st 1939 Britain Replies to Herr Hitler Hitler sent a note to the British Government last night. The cabinet meet this morning to discuss and after around one and a half hours of deliberation, they send their reply to Berlin. Britain is still standing firm in her undertaking to help Poland ..." As Britain stands… END_OF_DOCUMENT_TOKEN_TO_BE_REPLACED

The Countdown To War - August 30th The British Foreign Office sends a message to Berlin following reports of German sabotage in Poland. Poland is mobilising for war. Posters throughout the towns summon all men up to the age of forty to enlist. Ambassador Sir Neville Henderson received minimum conditions of settlement from Hitler yesterday,… END_OF_DOCUMENT_TOKEN_TO_BE_REPLACED

The beloved film, The Wizard of Oz opened today, August 25th 1939 in theatres throughout America. Starring Judy Garland as Dorothy. The film was based on the children's novel, The Wonderful Wizard of Oz, by L. Frank Baum. Also on this day in 1944, Paris is finally liberated following many days of fighting between the… END_OF_DOCUMENT_TOKEN_TO_BE_REPLACED 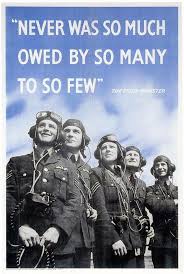 The Battle of Britain intensifies. Some cloud remained at dawn but it was expected to be a clear day, warmer in the south. For northern England, cloud persists and rain showers expected. Since August 18th, a lull had began, allowing both sides to regroup, rest, and prepare. The Luftwaffe have still not achieved what they… END_OF_DOCUMENT_TOKEN_TO_BE_REPLACED

On August 23rd 1940, the British destroyer, Hostile, strikes a mine off Cape Bon in the Strait of Sicily while on passage from Malta to Gibraltar and is later scuttled. HMS Hostile. Image courtesy of Wikipedia Also on this day, King George VI orders all Germans and Italians to be stripped of their British titles… END_OF_DOCUMENT_TOKEN_TO_BE_REPLACED

On this day in 1941, Drancy Internment Camp opened as an assembly and detention camp for Jewish people who would later be deported to other camps elsewhere. Originally built as a modern urban community, named La Cite de la Muette - The Silent City - it was situated in Drancy, a northeastern suburb of Paris,… END_OF_DOCUMENT_TOKEN_TO_BE_REPLACED

Sun Valley Serenade is a 1941 musical directed by H. Bruce Humberstone. The film starred Sonja Henie, John Payne, Milton Berle, Lynn Bari and the fabulous Glenn Miller Orchestra. It features Dorothy Dandridge who performs "Chattanooga Choo Choo", which did of course receive a nomination for an Oscar for Best Song, was later inducted into the Grammy… END_OF_DOCUMENT_TOKEN_TO_BE_REPLACED

On this day in 1941, a group of RAF men, all patients at the Queen Victoria Hospital in East Grinstead, founded The Guinea Pig Club. Bored, frustrated by their hospitalisation and numerous surgeries, the club was initially to be a drinking club, a way of passing time. The men named the ward at the hospital,… END_OF_DOCUMENT_TOKEN_TO_BE_REPLACED

I've written about D-Day a few times over the years, but today marks 77 years since the British and Allied Forces landed on various beaches on the French coast. Of course, that's only part of the story and part of the military campaign. Many more men jumped from Dakota's while the Navy played their part… END_OF_DOCUMENT_TOKEN_TO_BE_REPLACED

When I first decided to write about SOE heroine, Nancy Wake, I read the tiniest snippet about her beloved husband, Henri Fiocca. It wasn't much to go on, but it gave me an insight. Having watched and re-watched Nancy in interviews she gave over the years, I gained more insight whenever she was asked or… END_OF_DOCUMENT_TOKEN_TO_BE_REPLACED

This year's celebration marks 76 years since the end of the war in Europe, a war that had prevailed for almost six years and taken the lives of millions. On the 7th May 1945, many people heard whisperings that the Germans had surrendered and the war in Europe was finally over. On that same day, General… END_OF_DOCUMENT_TOKEN_TO_BE_REPLACED

Anzac Day is a national day of remembrance in New Zealand and Australia that commemorates all Australians and New Zealanders who served and died in all wars, conflicts and peacekeeping operations. It also commemorates all those who contributed and suffered as a result of their service. It is annually observed on April 25th, the day… END_OF_DOCUMENT_TOKEN_TO_BE_REPLACED

"I hate wars and violence but if they come then I don't see why we women should just wave our men a proud goodbye and then knit them balaclavas." Nancy Augusta Wake. My novel, Madame Fiocca: A WWII Novel, is based on the life of Nancy Wake, the famous SOE heroine, journalist and French Resistance… END_OF_DOCUMENT_TOKEN_TO_BE_REPLACED

My latest release, SPITFIRE, is a short story set during WW2, and features a male protagonist, Sam, a fighter pilot flying sorties over Dunkirk during Operation Dynamo. I have no idea where he came from except to say that one morning he simply materialised, and in good time too. As the 80th anniversary of the… END_OF_DOCUMENT_TOKEN_TO_BE_REPLACED

The Forgotten History of the Radium Girls By Samantha Wilcoxson June 7, 2020 – Luminous Blog Tour I have loved reading about history for as long as I can remember. On more than one occasion, I was asked what class I was reading a book for and I had to admit that it was something… END_OF_DOCUMENT_TOKEN_TO_BE_REPLACED

This week I'm on tour with my latest release, Madame Fiocca. For those who don't know, it's about Nancy Wake, the infamous SOE heroine, journalist and French Resistance courier. Here's a piece I wrote for Viviana Mackade's fabulous book blog today. To read the entire piece click the link below: https://viviana-mackade.blog/2020/03/09/on-tour-with-madame-fiocca-by-suzy-henderson-and-meet-the-author/comment-page-1/?unapproved=32162&moderation-hash=684d3ec31090c1487941ac2f9acc95e1#comment-32162 Finding Nancy Wake by… END_OF_DOCUMENT_TOKEN_TO_BE_REPLACED

Join me here at Viviana Mackade’s wonderful book blog and discover more about Nancy Wake, the lady behind my latest book, Madame Fiocca. Enter the giveaway for your chance to win a free copy of the book.

This is so interesting!

February 1933: Nancy Wake is a gregarious twenty-year-old looking for adventure. Having fled her unhappy family home in Sydney, she becomes a journalist and is thrilled when she is posted to Paris. Thecity is glamorous, brimming with journalists, artists, and a growing number of refugees.

Later, in the French Riviera, she uncovers more than news following a chance encounter with wealthy industrialist, Henri Fiocca. Their relationship blossoms as Hitler makes waves across Europe. While onan assignment in Vienna in 1938, she witnesses Nazis whipping Jews on the street and she vows to fight for justice if ever the opportunity arises.

When Henri is called to the Front to fight, Nancy, determined to help the war effort, joins the Red Cross as an ambulance driver. Every day she witnesses atrocities. When Paris…

This weekend only: Grab a copy of Madame Fiocca FREE e-book until January 26th. Universal Link: http://mybook.to/MadameFiocca Latest Review 5 Stars: From the first paragraph of this enthralling biography that reads like a memoir, my attention was firmly grabbed and it never once flagged, even when it looked like Nancy’s life would be all love and… END_OF_DOCUMENT_TOKEN_TO_BE_REPLACED

What is your latest book about? My most recent release is a novella, Christmas at Blue Hydrangeas, a prequel to my novel Blue Hydrangeas, an Alzheimer’s love story. So many readers told me they wanted to return to Blue Hydrangeas, a Cape Cod bed and breakfast, after reading BH that I had to revisit the… END_OF_DOCUMENT_TOKEN_TO_BE_REPLACED

People often ask me when I began to write and why. Well, the answer is, it crept up on me. My first desire to write cropped up during my English lit degree with the Open University. For those of you familiar with the OU, one chooses which module they wish to study from a selection… END_OF_DOCUMENT_TOKEN_TO_BE_REPLACED

Today I welcome fellow author, Pam Lecky, who's here to tell us about her latest novel, No stone Unturned, book one in a new crime series. If you enjoyed a good old execution in the 18th or early 19th century, it was possible to buy a crime broadside at the hanging which was produced by… END_OF_DOCUMENT_TOKEN_TO_BE_REPLACED

Madame Fiocca By Suzy Henderson Marseille, September 1939. War is coming. Nancy Wake is a gregarious twenty-seven-year-old about to marry wealthy French industrialist, Henri Fiocca. When Henri is called to the Front to fight, Nancy, determined to help the war effort, travels to Paris to join the Red Cross as an ambulance driver. Every day she… END_OF_DOCUMENT_TOKEN_TO_BE_REPLACED

My love of military history has led me to the most fascinating discoveries - of people and their stories. Of those, one, in particular, stands out from the crowd. Serenade To The Big Bird was written by 1st Lt. Bert Stiles, of the United States Air Force. Before this, Bert flew bomber missions as a… END_OF_DOCUMENT_TOKEN_TO_BE_REPLACED