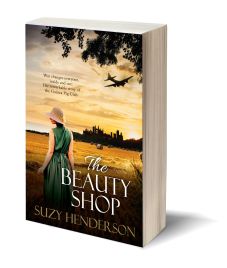 England, 1942. After three years of WWII, Britain is showing the scars. But in this darkest of days, three lives intertwine, changing their destinies and those of many more.

Dr Archibald McIndoe, a New Zealand plastic surgeon with unorthodox methods, is on a mission to treat and rehabilitate badly burned airmen – their bodies and souls. With the camaraderie and support of the Guinea Pig Club, his boys battle to overcome disfigurement, pain, and prejudice to learn to live again.

John ‘Mac’ Mackenzie of the US Air Force is aware of the odds. He has one chance in five of surviving the war. Flying bombing missions through hell and back, he’s fighting more than the Luftwaffe. Fear and doubt stalk him on the ground and in the air, and he’s torn between his duty and his conscience.

Shy, decent and sensible Stella Charlton’s future seems certain until war breaks out. As a new recruit to the WAAF, she meets an American pilot on New Year’s Eve. After just one dance, she falls head over heels for the handsome airman. But when he survives a crash, she realises her own battle has only just begun.

Based on a true story, “The Beauty Shop” is a moving tale of love, compassion, and determination against a backdrop of wartime tragedy.

Available from Amazon in e-book and paperback format. Read for Free on Kindle Unlimited. Also available to order from Foyles, Barnes & Noble, Waterstones and many other online retailers and local bookstores.

February 1933: Nancy Wake is a gregarious twenty-year-old looking for adventure. Having fled her unhappy family home in Sydney, she becomes a journalist and is thrilled when she is posted to

Paris. The city is glamorous, brimming with journalists, artists, and  a growing number of refugees.

Later, in the French Riviera, she uncovers more than news following a chance encounter with wealthy industrialist, Henri Fiocca. Their relationship blossoms as Hitler makes waves across Europe. While on an assignment in Vienna in 1938, she witnesses Nazis whipping Jews on the street and she vows to fight for justice if ever the opportunity arises.

When Henri is called to the Front to fight, Nancy, determined to help the war effort, joins the Red Cross as an ambulance driver. Every day she witnesses atrocities. When Paris falls, Nancy flees the German oppressors and returns to Marseille. France is a nation defeated; its people are in despair.

A chance encounter with a British officer draws Nancy into the heart of the Garrow escape network, despite Henri’s reservations. Soon she finds herself caught up in a deadly game of espionage.

As the iron fist of the enemy tightens, neighbours denounce neighbours. No one can be trusted. When the enemy closes in, Nancy and Henri face an impossible choice. Has she done more harm than good?

Based on a true story of love and a gripping adventure, Madame Fiocca weaves an extraordinary tale of survival and redemption in wartime.

Available in e-book format from: